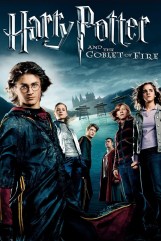 (In preparation for Fantastic Beasts and Where to Find Them, I will be reviewing all the Harry Potter films)

Following the incredible Prisoner of Azkaban, Goblet of Fire is a pretty crushing disappointment in just about every respect.

Oh, where to begin?

The story here has Harry unexpectedly thrown in the legendary Tri-Wizard Tournament, where he is forced to compete in magical tasks against older and more experienced students. And in the background the threat of Voldemort is slowly growing.

The first crime Newell commits is that instead of making a Harry Potter film, he seems determined to make a vapid and deeply cheesy modern high school film. And he succeeds unfortunately.

Added to that is the unfortunate reality that Mike Newell is simply not a very good director. He is utterly unable to build tension, tell a coherent plot, or mold his erratic style to fit into an already established universe. He tries to forge his own way, somewhat like how Cuaron did before, only difference here being Cuaron is a brilliant artist and he is not.

Every major choice he makes is usually the wrong one.
All of the guys have awful heartthrob haircuts for no reason. Established characters don’t act like themselves, and erratically flit between whichever random nonsensical traits Newell feels they should have from scene to scene.
The worst offender is his treatment of Dumbledore. Michael Gambon does the character complete justice in several other films, so I won’t blame him. Instead of the serene, wise and powerful mentor figure he is in the rest of the series, here he is portrayed as confused, erratic and fearful for most of the time.
Emma Watson, another great actress who more than proves herself as Hermoine in other films is likewise completely out of character here. For no real, discernible reason, her performance is fairly shrill and she plays the character as if she is trying to blink back tears in every single scene. It’s quite irritating knowing how charming she can be.

Another issue is the portrayal of magic. Newell abandons the wonderful, subtle yet powerful style Cuaron brought, and instead goes back to Columbus’ rather childish and clunky portrayal of spells. And while the whimsical style of the first two films made it work, it feels very out of place here.

And then there’s the story.
I don’t mind departures from the book, as long as there’s a reason and it works.
Is that too much to ask? Apparently.
There are too many bizarre and utterly pointless plot and world-building changes made here to count, and almost to a one, they all serve to make the story more confusing or just plain stupid. Random plot threads are brought up then forgotten, lazy, obvious red herrings are thrown in for no reason. And overall the plot just feels constantly rushed and muddled.
The entire narrative just feels confused and misguided a lot of the time.

This isn’t an all out awful film, there are some elements that still work. Namely the cast.
Despite Newell’s best efforts, these actors are still incredible, and they all do there jobs quite well. Alan Rickman as Snape is still a pure delight stealing every scene he’s in, and a few of the newcomers are good.
Brendan Gleeson is perfectly cast as “Madeye” Moody, though he also is misused by Newell’s direction. Switching wildly between a perfect translation of the character to a raving lunatic in a way that is truly baffling. Daniel Radcliffe is also quite good, giving his best performance yet and surprisingly, Robert Pattinson is also pretty tolerable.

And since Newell’s main focus is on creating a high school movie, a lot of the angsty, goofy melodramatic comedy works well enough once you accept the fact that you aren’t watching a Harry Potter movie. There are several genuinely funny moments here and there.

And thankfully, he does get one very important element mostly right. When we finally get to see the return of Voldemort in the flesh, Ralph Fiennes is appropriately disturbing and terrifying. His climactic duel is surprisingly well done, and actually fairly emotionally affecting. The scene of Cedric Digory’s father weeping over his dead son is one of the most haunting moments in the series.

I will admit, that a lot of my irritation with this film stems from my deep love of the books, but there are a lot of cinematic elements that are simply lazy and it needlessly changes the characters from their film portrayals in bizarre ways that adds nothing.

Overall, it’s a mildly diverting family fantasy film, but its is commits several grievous crimes against both the books and previous films. And the plotting and pacing are unnecessarily confusing and muddled, and the tone is all over the place. Scenes that should be tense and suspenseful fall flat, and scenes that should be funny or moving are often cringe worthy.

View all posts by Franchise Fatigue