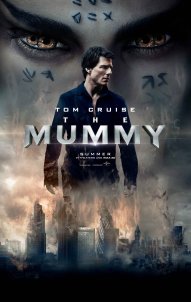 The best thing I can say for it is that its never… bad. It’s even good at times.
It starts quite well. Having worked extensively with the likes of J.J. Abrams and Michael Bay, Kurtzman learned from the best on how to put on an exciting and entertaining action sequences. While never as impressive as those two, he shows a very steady eye and a good sense for building and shooting a solid sequence. That’s where this film is at its best, with a competent director and insanely committed performer battling the forces of darkness in impressively practical set pieces with actual stunts.
Tom Cruise continues to prove why he’s the epitome of a movie star in yet another charismatic and engaging performance even while the character is rather slimy and woefully underwritten.
In spite of the story steadily losing its focus the longer it goes, he always grounds and propels the film forward through sheer willpower and magnetism.
But, overall, aside from the action sequences, Kurtzman’s direction is kinda bland. He knows how to point a camera and compose decent shots. But aside from one or two mildly creepy scenes, most of the film’s attempts at horror and scares just don’t get there.
It feels like the film is having something of an internal identity crisis throughout, flitting between summer blockbuster, campy horror comedy, straight horror and the ever popular, forced franchise building.
While the tonal shifts were never particularly egregious in the moment, they did prevent the film from forming much of a coherent identity and voice.
I guess that’s not terribly surprising considering the films six credited writers.
As far as the rest of the cast, they all do well. Annabelle Wallis tries very hard and manages to make something of an impression despite her thankless and flat role. Russell Crowe gets to let lose in away I haven’t seen in a while from him, and its quite entertaining.
And Sofia Boutella as the titular Mummy brings a great physical presence and is an imposing and dangerous, if underwritten villain.
The film makes the admirable choice to go for a subdued, character driven finale which was an impressive choice for a blockbuster these days. But unfortunately, it never bothered to lay the groundwork to build these characters throughout the film, so what could have been emotional and heartrending just comes off flat and unearned. Still, its a risk I very much respect and wish more films of this type would take.

For the first half I thought I would really like this film, the action is very entertaining, Tom Cruise is watchable as ever, and the film making is competent throughout. But the longer it went, it became more and more clear that this film simply lacked a soul. There’s no one terrible element I can point to. It just never rises of above a mildly competent, but completely perfunctory and underdeveloped idea with way too much focus on the future, and not nearly enough on the present.

I’m am very interested to see what a more character focused film maker like Bill Condon can do with the next installment, The Bride of Frankenstein. There is definite potential for some very fun films here.

Listen to our episode on the 1999 The Mummy remake

View all posts by Franchise Fatigue